In 1927 when Leo & Kathryn Theisen founded Theisen's and opened their first store, Theisen Battery & Electric at 8th Street in Dubuque, they didn't realize what Theisen's would become. Today, Theisen's is a major player in the retailing industry in Iowa.

Theisen's is led by members of the family including Jim Theisen, current President, who joined the Company in 1956 and his sons Tony and Chris Theisen who joined their father in 1987. 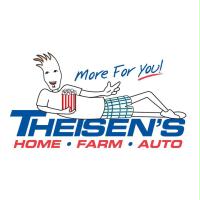